Brazilian and French scientists working out of the University of São Paulo and the Atlantic National College of Veterinary Medicine, Food Science and Engineering have discovered a dry heating treatment that converts wheat starch to hydrogel form. This discovery better allows the starch to be used in additive manufacturing for food products. The innovation notably improves the printed wheat product’s ability to retain shape, which is a critical part of large-scale additive food production. The researchers also successfully tested their method on cassava starch. The researchers’ results are published in Food Research International.

Printing food products is a growing segment in the additive manufacturing space. This network has reported recent developments, which include a first bioprinting meat in space and Cakewalk3D’s Digital Patisserie. The segment has also grown to attract more established investors. These developments augur well for the scientists’ research, which could help promote increased investment and commercialization of additively manufactured food products. 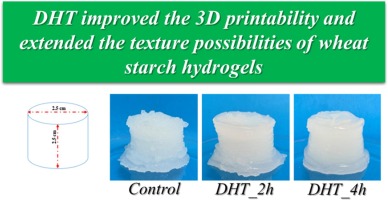 The researchers in the instant case modified wheat starch by dry heating it over two and four hours at 130˚C. This process caused the starch’s granule size to increase while retaining its original shape. The starch’s molecular grouping did not change. These altered starches were used as hydrogel inks, which were passed through a 3D printer to create test shapes.

These results suggest that wheat starches may be able to play a more important role in the food segment of the additive manufacturing industry, notably as structural elements that might allow other food products to break into the space. Sintavia gets AS 9100 certification for design and development